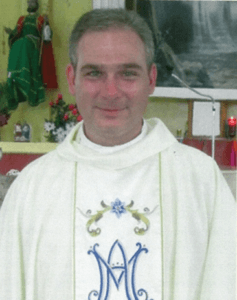 Who is Fr. Michael Stalla?

Fr. Michael Stalla is the pastor of SS. Cosmas and Damian Parish in Twinsburg, Ohio. (2015 to present).  He has a secondary assignment of teaching Spanish Speaking Homiletics at St. Mary Seminary.

Fr. Michael grew up in Westlake/ Avon and attended the parish and grade school of Holy Trinity, Avon.  Along with the example of his family, the Notre Dame Sisters gave him his strong foundation in his Faith.  He is the fifth of seven children.  He has 14 nieces and nephews.

Fr. Michael graduated St. Ignatius High School in 1993 and John Carroll University in 1998.  He went to Borromeo Seminary and then St. Mary Seminary and Graduate School of Theology.  He has a BA in Philosophy, an MA in Systematic Theology, and a Masters of Divinity.  Fr. Michael was ordained a Diocesan Priest on May 17, 2003.

While in the seminary, Fr. Michael developed a charitable organization that provided vitamins to poor children in El Salvador.  He also joined the Knights of Columbus.

Fr. Michael’s first assignment was St. Mary Parish in Painesville (2003-2007).  He had experience with Hispanic Ministry, Jail Ministry, Juvenile Detention Ministry, Hospital Ministry, RCIA, Marriage Preparation, the Grade School, and many other ministries.  While at this assignment, he had a secondary responsibility to care for the pastoral needs of St. Francis Parish in Cleveland.  Fr. Michael also served as a Mentor at Borromeo Seminary.

Fr. Michael’s second assignment was at St. Raphael Parish in Bay Village (2007-2009).  During this time, Fr. Michael worked with RCIA, Marriage Preparation, the Grade School, Young Adult Ministry, and much more.  While at this assignment, he had a secondary responsibility to teach Ethics at Borromeo Seminary as a course recognized by John Carrol University.  He also was a national speaker for Stewardship International.

Fr. Michael’s third assignment was to the Cleveland Diocesan Missions in El Salvador (2009-2015).  Fr. Michael served as the Parochial Vicar of San Pedro, Apostol in Teotepeque and its 26 communities for 1 ½ years until he was named pastor (2011-2015).  He was also Parochial Administrator of Chiltiupan and its 12 communities for two years (2009-2010).

Fr. Michael is naturally a teacher.  He has a strong desire to evangelize, to prepare couples for Holy Matrimony, to offer spiritual direction, to connect his parish with the greater Church around the world, and to encourage a Charismatic spirituality of allowing the Holy Spirit to guide our lives and the direction of the parish.